The plight of the Grey wolf 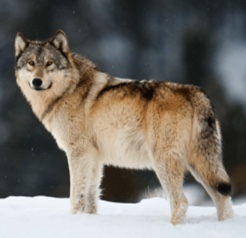 The United States government, under the Trump administration, announced in October that the grey wolf will no longer receive federal protection under the endangered species list. This decision has been met with criticism from conservation groups and researchers including four of the five researchers tasked with the independent review of the proposal. The Department of Interior claims that after 45 years, wolves have met their conservation goals despite wolves only occupying a fraction of their former range.

The relationship between humans and wolves has often been contentious.  The negative portrayal of wolves in our society and federal eradication has brought us to our current crisis today. The gray wolf once had an estimated population of over one million and roamed over two-thirds of the United States. Today as federal protections are being stripped, the gray wolf population in the contiguous United States only numbers around six thousand and is not free to roam its former lands.

Conservation groups argue this year’s decision on wolves is premature and point to disastrous examples such as the removal of wolves in Yellowstone National Park in the 1800 and 1900s. Yellowstone National Park, the world’s first national park, was created in 1872 by President Ulysses S. Grant. Settlers during the western expansion of the United States in the 1800 and 1900s saw wolves as a dangerous nuisance and routinely hunted wolf packs. The extermination of wolves was a federally backed program and the last wolf pack in the Rocky Mountains was reportedly killed in 1926. As the population of wolves in the United States plummeted, we began to see the disastrous effects of eliminating the important apex predator role in our natural ecosystems, particularly in Yellowstone.

Removal of the wolf from Yellowstone led to dramatic negative effects on animal species and their surrounding vegetation. Without wolves, their natural predators, an overwhelming elk and deer population led to the widespread overgrazing of foliage and a cascade of effects on many endemic species. This effect is known as trophic cascade, an ecological process that begins at the top of the food chain and affects everything below. The loss of native trees and foliage due to overgrazing not only affected birds’ nesting but also reduced beaver dams which led to a lower fish population and the predators that fed on them such as bears and foxes.

Biologists recognized this cascade of negative effects from removing wolves and created a plan to reintroduce the apex predator. In  1995, grey wolves from Canada were relocated to Yellowstone National Park under the direction of the United States Fish and Wildlife Service. Added to the endangered species list in 1976, the reintroduction to Yellowstone was the first rehabilitative action for wolves. Wolves not only affected the wildlife in the park but also improved the physical geography of the region. The strength and size of willow trees and other vegetation increased, creating more homes and food sources for birds and beavers. Increased fish and beaver populations and the effects of wolves in Yellowstone changed the behaviors of rivers in the park as well. Wolves helped decrease erosion, increased the number of pools, and stabilized the flow of rivers.

The resounding success of Yellowstone’s reintroduction program is now reaching other states. In November 2020, Colorado became the first state to approve the reintroduction of the wolf into an ecosystem. State voters approved Proposition 114, an initiative that will reintroduce wolves to their native land in the Rocky Mountains. Although wolves have a predisposition to avoid humans and their attacks are very rare, many people are opposed to reintroduction programs due to an unfounded belief that wolves are a danger to humans and livestock. But as seen in Yellowstone, the reintroduction of wolves is an important part of maintaining healthy ecosystems.

Now that federal protection has been removed, the future of the grey wolf in the lower 48 states of America now belongs in the hands of state governments and their voters. Just as in the past, states may allow hunting and trapping of wolves. This is an extremely dangerous scenario for a population that is still struggling to recover from previous eradication. The work of environmentalists that took decades could be erased in just years if we allow our government to continue passing anti-wolf measures and stripping protection. Various organizations have brought lawsuits against the federal government for delisting the grey wolf and need your help by making your voice heard.

You can help secure the future of the grey wolf in America by signing petitions, contacting your local representatives, and voting in favor of pro-wolf protection and reintroduction.